ALWAYS GET THE BEST

Heres an article that Garry wrote earlier this year

THE ADVANTAGE OF LAST MINUTE INFORMATION

A number or readers have expressed an interest in using Horse Racing as a fun investment but don’t  know how to go about it. In fact, they often don’t consider that in their own field they studied and worked hard for years, to learn their trade, or make a success of their business. Form analysis is a highly involved occupation and only a handful of people are successful at it. The analysts who work for the raceclubs, set the handicaps for the horses and while they have a set of rules to follow , outside analysts and observers are always looking for where they got it wrong.

This is why you need to get an expert to supply you with not only the form analysis but also the race selections which represent an edge over the bookmakers. And don’t rely on Racing journalists to do it for you. Their suggestion have to be in days in advance before final fields and track conditions are known.

Racing is like purchasing over the internet. One single product may be available from several suppliers, books are a case in point. One item I purchased at Christmas was $32.99 in hard copy at book stores but was priced at between $12.99 and $19.99 in ebook or kindle type formats. No need to guess what version I purchased for my Ipad.

Horse racing is the same. At the races bookmakers adjust their prices as people place their bets so that the bookies come out on top. Online bookmakers take notice of their online bets PLUS the price changes from the track. Depending on their exposure they may follow these or in some cases ignore the changes. This means that sometimes the horse you might wish to bet on is $6 with one bookmaker and $5 somewhere else. No need to guess where you would place your bet!

At www.horseracingaustralia.info you can get a service (Winform/GTX program) focussed on major race meetings on Saturdays that provides two of the best possible selections in each race along with the amount of money to be placed on each selection at the best possible price (20 divided by the price). It is based on a suggested outlay of $20 per race so that those wanting to bet more simply increase their outlay proportionately OR decrease if you have doubts or just want to have a flutter.

Many punters will simply bet until they have made a set profit for the day and then quit, happy to know that they have won in what is a very difficult game for amateurs, which is why over 97% of players regularly lose. It is only the well informed players with professional information that succeed.

A good recent example showed an outlay of $360 over 18 races for the day with a return of over $500. That is a good day’s work and for those people who have other things on they can just set and forget but the interesting thing is that three of the first four races resulted in a handy profit so those who want to walk away a winner could easily have done so.

Garry recommends vicbet.com because the dividend is always Best Of The Best on all mainland gallops race (doesnt include trotters that broke……) Just ket them know you heard it here to get extra benefits on top. 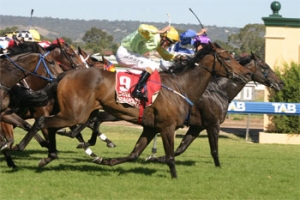