mud on my face but its temporary

Okay, the Tabcorp demerger did make investors a short term profit of about 10% or so but then fell before a general market lift yesterday. I still have doubts about the future though. I also got slugged by PBH again after selling out at $2.50 and $2.60 ( I had paid up to $12 for shares) I see they shot back up to $3 yesterday. Luckily though the stock I bought with the money also shot up.

Personally I am still concerned about the Ukraine situation because the Russians have started winning due to the late delivery of better long range artillery and the fact that they are using Hyperbaric weapons now and phosphorous bombs.

The Ukranians are fighting with one hand tied behind their backs because it is machines against machines and the Russsians are prepared to use it against civilians. The poor old (yes the seriously old) dont know and dont care whats going on they just want it all to stop.

Here in Australia, we are fighting a different kind of war. It is a talking war. 20 years ago when we moved to a waterfront for the first time we had a high water mark survey (compulsory) and then again recently we had another one as the government are quite serious about collecting revenue form any movement. The highwater mark hadn’t moved by a single centimetre.

The last two or three years we have had fewer storms than normal and fewer bushfires. So yes the climate is changing but its very random and most of what we are doing is like King Canute trying to stop the tide. Truth be told, we humans have a very high opinion of ourselves yet in 100 years of rocket science we are yet to learn to escape the earths gravity by any other means but rocket fuel.

Of Racing interest, the first SIX RACES at Hamilton are all jumps races so lots of spectacular action for those readers who still see Jumps racing as an essential part of Horse Racing. 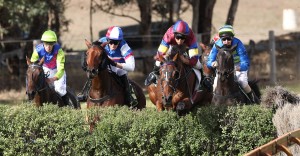