On any random day we can see amazing results like yesterday at least two $20+ winners on top. If only we could know when but we don’t and that’s why we created the Winform Powerplay platform.

Years ago Trevor Johns believed he had the perfect plan. He ran Powerplay on a large scale but targeting each race venue on its own. What this did was give plenty of time for the bets to get on race to race. So four race meetings four plans operating. Of course it was useless applying these plans to places where favourites won more races than usual. He needed to screen places like Moonee Valley and Caulfield out because those venues have higher favourite strike rates.

By contrast Sandown, particularly Hillside, and Flemington, had much lower favourite strike rates and there for higher average dividends across most categorys.

Rolling from one race to the other, runs of outs were minimal and just an average dividend was enough to clear the series, at which time all betting ceased.

The aim was to make a set amount and also to walk away when that amount was lost so if making $100 was the aim, betting ceased when either $100 was won or $100 was lost. On the basis that he won more times than he lost it had to be a winning strategy.

Michael, the retired postman has his own set of rules and he has recorded strings of 20 and 30 winning days in a row and when he does have a losing day it is rare enough to ensure he consistently walks away a winner.

Michael started subscribing in May 2003. The reason Michael doesn’t burn out is simple. He does not have to bet everyday and also he doesn’t generally bet on weekends, preferring the midweek country and provincial meetings and as well, because he quits when a set amount in front, he isn’t tied down.

I love telling these success stories because to put it simply they are stories of our subscribers operating professionally regardless of whether they are actually full time professionals or not. In Michaels case he started betting when he returned home form work each day and so his requirements on a daily basis were small. Once he retired though, he had no restrictions on when he could starts each day and therefore operated on more races and bigger daily profit goals.

Plenty of action today so time to start analysing for today. 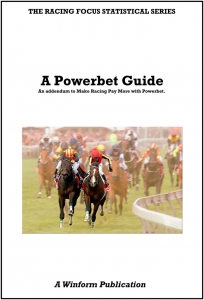