HOPE YOU ALL DID WELL

The Diary is meant to be a a sort of diary of my life experiences as a professional punter, Racing journalist and etc. etc. but I got a slap on the wrist from some financial adviser clients who suggested my mentioning my investment choices in public could be viewed dimly by the ASIC. I didn’t see it that way but I did cease mentioning the fact that I had bought ZIP pay, Afterpay and the like and why I did so. I suggested they might be in a few years somewhat Mastercard and Visacard as use of penalty ridden credit cards with interest rates as high as 22% . The difference being that BNPL providers don’t charge interest.

So for those that did happen to read my mentions and opinions I can reported that the CEO of Zippay in an interview yesterday did say he expected ZIP to rival Paypal in a few years.

Some members have already told me they bought Zip and Afterpay. I do like them but I admit to being biased as it is clear that these two companies will fund our lives for the next 30 years or so or whatever we have left.

For the past three years I have taken control of our super fund and even though we suffered a 60% drop in the crash, I have been able to trade my way out of it and now sit comfortably ahead of my precrash balance. I can tell you what I did but I cant suggest what I may do, don’t want a negative reaction from ASIC.

On the personal front, I am taking Ros for her medical appointment today and I might even buy her lunch with my profits.

Yesterday we had just one Hotshot selection ad it won at $6.20. You beauty. That covered part of the downturn from last month.

Winform top two had 32% winning races at an average div of $5.72 more on Best Of The Best at Vicbet.

Winform country and provincial qualifiers as referred to in the recent book How To Win @ HorseRacing2Day had 126 wins from 682 19% just one% less than normal but av div was down at $5.01

My personal profit at this stage of the year is already more than all of last year which was good. A number of successful First 4s and Quaddies has helped enormously. 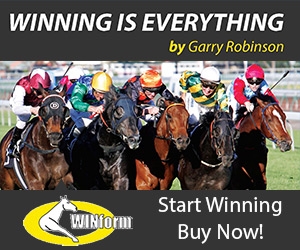